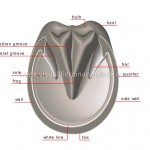 The developing science of the equine foot has generated much research, countless articles, and discussion regarding how the foot functions and how it responds during particular diseases. In some instances the horse’s foot requires protection from injury, depending on the athletic event, the surface the horse is ridden on, and the condition of the foot. This protection can either be long-term, as with a shoe, or short-term, as with a boot, but ultimately it should maintain and/or improve how the foot functions.

“Barefooted,” on the other hand, simply means the horse does not wear shoes. While genetics is an important factor in determining a healthy foot, the “external environment” (e.g., trimming and diet) also has a great impact on the foot’s health. Trimming too much or not enough; leaving a long toe or high heels; or loading certain parts of the foot rather than other structures will deleteriously affect the foot over time. The bones and connective tissues inside the foot will gradually change to the point that after a few years the horse might become sore and unsound.

The equine hoof is like a hydraulic system that cushions the foot while protecting the vasculature (blood supply) and simultaneously dissipating impact energies. When a horse’s foot contacts the ground, the footing that packs the foot while he moves (“dirt plug”) stimulates the sole and the frog and facilitates vascular perfusion (blood supply to the tissues) and support. This dirt plug covering the solar surface of the foot (the frog, bars, and sole) is important for proper loading, support, and functioning of the foot as it provides stimulation of sensory receptors and nerves and dissipation of the high-frequency impact energies generated during foot contact. Tactile stimulation of the solar surface contributes to both the development of protective fibrocartilage within the foot and the active dilation of the blood vessels. Without this tactile stimulation fewer vessels will dilate and open, resulting in less of a cushioning effect within the foot and less energy being dissipated.

The manner of trimming the bare foot is important, as it should maximize the efficiency of energy removal or its transfer to the vasculature and promote support: Less efficient energy transfer means less energy (created at impact) will be removed from the foot. It also means more impact energies will be transferred to the ligaments, bones, and other connective tissues within the foot, possibly resulting in their deterioration and development of pathologies (disease) over time. Thus, the foot should be trimmed so the front part of the frog is in contact with the ground to facilitate tactile stimulation and thwart these negative effects.

Trimming frequency also is important and should be done often, as the hoof wall grows to extend beyond the solar surface of the foot. The solar surface should be trimmed only minimally or, at best, not at all under most normal foot conditions. Because of the active sensory engagement of the solar surface, barefoot horses prefer to (and should) stand on conformable surfaces such as pasture, sand/dirt, pea gravel, etc., rather than on hard surfaces such as cement. Further, they should have ample opportunity to move, since perfusion of the foot improves when tactile stimulation of the solar surface opens many of the small vessels. In this respect barefoot horses’ feet are similar to our own, as we too prefer to stand on comfortable surfaces, such as a thick rug, or in our cushy slippers rather than in our work boots.

If you decide to go the “au naturel” way, be sure to ask your farrier about his or her trimming methods. If the farrier normally removes significant tissues from the frog, bars, and sole for any reason, then you should ask why and see if he or she can trim less aggressively. The following generic barefoot trimming recipe, however, works well with most horses: Keep the toes short, leave the frog and sole alone, and trim the bars to the sole level so more load is distributed on the solar surface. Most importantly, the foot should be trimmed frequently—every five weeks or less. Going barefoot does not mean you your horse’s feet won’t require care.