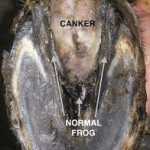 Canker is an unusual condition of the horse’s foot that affects the frog, bars, and sole. The name comes from the early belief that the condition was of a cancerous nature. However, to the best of our knowledge, canker is an anaerobic (grows in the absence of oxygen) infection in the superficial epithelium of the hoof (the outermost tissues, which produce the horn). The causative bacterium is unknown, but some researchers have suggested the organism is a part of the Bacteroides species, which is similar to what causes “foot rot” in sheep. In a more recent study researchers found spirochete (spiral-shaped) bacteria in the epithelium, which was similar to findings in cows and sheep with digital dermatitis. Equine canker cases usually are found in the southeastern United States, but they have been diagnosed all over the country.

The microorganism associated with canker causes abnormal keratin production, or overgrowth of the horn. This excessive proliferation occurs underneath the horn, as the infection spreads throughout the epithelial layer. Commonly, an affected horse will have white or gray matter that is moist and spongy appearing in the sulci region (grooves on either side and in the center of the frog) of the hoof. This characteristic growth’s appearance has been described as similar to wet cauliflower with cottage cheese like exudates. If there is extensive infection, heat might be felt in the hoof, but usually only in extreme situations.

Canker is fairly rare and only briefly discussed in veterinary textbooks. Most texts suggest that housing a horse in unsanitary conditions causes the disease; however, farms with both the best of stable management and the worst can have horses with canker. In attempts to recreate the disease, I and others have packed the frog with manure after injecting what we believe are the causative bacteria, but we still have been unable to prove that unsanitary conditions contribute to canker’s onset. Development might instead be influenced by how the horse is used. Stalled horses with little exercise seem more predisposed to the disease than horses that are active and kept outdoors.

In contrast to thrush, which is a necrotic or tissue-destroying process, canker creates abnormal tissue growth and is described as a hypertrophic pododermatitis. Both thrush and canker are found in the same region of the foot, but thrush resembles a tarlike substance. While thrush eats at tissue, the inner tissues of the digit are protected until bacteria get deep enough to deteriorate more sensitive structures. Canker, on the other hand, spreads in live tissue, without the help of oxygen.

Treating canker can be challenging. Veterinarians have suggested many medications and treatments, but successful therapy is based on the following:

1. Superficial debridement (cutting away abnormal tissue) over the entire affected area. This can be done using eithergeneral anesthesia or a nerve block. Only the superficial layer of infected tissue should be removed, as excising too deeply can retard healing and might also drive the infection into deeper tissues. Some veterinarians follow the debridement with two to three superficial freezes of the affected area to further kill off the diseased tissue.

3. Topical treatments. Veterinarians have suggested several, but the two most effective topical therapies are the antimicrobial drug metronidazole and 10% benzyl peroxide solution. Metronidazole is usually ground into a powder and spread over the affected area. Benzyl peroxide is a potent astringent commonly found in acne medicine. It is soaked into gauze sponges and applied as a wound dressing. Systemically, no medicine will cure canker if superficial debridement is not performed.

After applying the topical medication, apply a clean, dry, waterproof bandage. Many veterinarians recommend using shoes with treatment plates, which are more convenient than bandaging the hoof.

Horses have variable responses to treatment. Some cases heal within a week or 10 days, and some cases last for months. Given good, aggressive treatment, a week to 10 days of intensive therapy should control the canker. Once the tissue has healed, it is very rare for the disease to recur. However, before healing is complete, canker might return—a trait that led many to believe it was a cancerous disease.