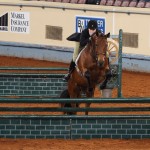 Exertional rhabdomyolysis has been recognized in horses for more than 100 years as a syndrome of muscle pain and cramping associated with exercise. Exertional rhabdomyolysis continues to be a performance-limiting or career-ending disorder for many equine athletes. In the last 15 years, research advances have provided greater insight into this syndrome. Of greatest importance is the realization that exertional rhabdomyolysis comprises several myopathies that, despite similarities in clinical presentation, differ considerably in regards to pathogenesis (cellular events, reactions, and other pathologic mechanisms occurring in the development of disease) (Valberg et al 1999a). In addition, new knowledge regarding effective management of horses with exertional rhabdomyolysis, particularly with regard to diet, has significantly reduced the severity ER in many horses.

Clinical signs of exertional rhabdomyolysis usually occur shortly after the beginning of exercise. The most common sign is firm and painful muscles over the lumbar (loin) and sacral (croup) regions of the topline, including the large gluteal muscles (Firshman 2003). Excessive sweating, quick, shallow breathing, rapid heart rate, and muscle tremors are also noticed. In extreme cases, horses may be reluctant or refuse to move and may produce discolored urine due to the release of myoglobin from damaged muscle tissue. Episodes of ER vary from subclinical to severe in which massive muscle necrosis and renal failure from myoglobinuria occurs.

In order to confirm a diagnosis of ER blood samples should be obtained to determine that serum creatine kinase (CK) and aspartate transaminase (AST) activity are elevated. When muscle cells are damaged, CK and AST are released into the bloodstream within hours. AST activity may be heightened in asymptomatic horses with chronic exertional rhabdomyolysis.

Muscle biopsies are helpful in distinguishing various forms of chronic tying-up.  Muscle biopsies are stained with a battery of histochemical and tinctorial stains and examined under the microscope to look for specific types of exertional rhabdomyolysis.

Sporadic exertional rhabdomyolysis occurs most commonly in horses that are exercised in excess of their level of conditioning. This happens frequently when a training program is accelerated too abruptly, particularly after an idle period of a few days, weeks, or months. Endurance competitions held on hot, humid days may elicit sporadic exertional rhabdomyolysis in susceptible horses because of high body temperatures, loss of fluid and electrolytes in sweat, and depletion of muscle energy stores. These metabolic imbalances can lead to muscle dysfunction and damage. In some instances, horses seem more prone to exertional rhabdomyolysis following respiratory infections. Therefore, horses should not be exercised if they have a fever, cough, nasal discharge, or other signs of respiratory compromise.

A well-designed exercise program and a nutritionally balanced diet with appropriate caloric intake and adequate vitamins and minerals are the core elements of treating exertional rhabdomyolysis. In some cases, deficiencies of vitamins, minerals or electrolytes may cause sings of muscle pain and stiffness in horses. Suggested deficiencies include:

Adequate amounts of vitamin E and selenium prevent the detrimental interaction of peroxides with lipid membranes of the muscle cell. Most horses with chronic rhabdomyolysis have adequate or more than adequate concentrations of vitamin E and selenium, and further supplementation has not been found to have protective effects on muscle integrity in exercising horses (Roneus 1985). Many feeds, particularly those designed for horses with rhabdomyolysis, provide adequate selenium supplementation and caution should be taken not to provide excessive selenium in the diet. Likewise, sufficient vitamin E is provided in most diets by green grasses, well-cured hay, and rice bran. The new natural vitamin E products that consist of water-soluble particles appear to be better absorbed than synthetic vitamin E.

Horses performing in hot weather often develop electrolyte imbalances, particularly if exercise continues for several hours. Free-choice access to loose salt or a salt block should be provided to these horses, or alternatively, one to four ounces of salt can be added to the feed daily. Extreme climatic conditions may necessitate the use of commercial electrolyte mixtures containing a 2:1:4 ratio of sodium:potassium:chloride. Fresh water should be available to horses at all times, especially if they are being supplemented with electrolytes.

Supplementation with oral chromium (5 mg/day) has been suggested to calm horses and improve their responses to exercise possibly by affecting glucose and glycogen metabolism, possibly by potentiating the action of insulin (Ott 1999). The purported calming effect of chromium may be beneficial in horses with recurrent exertional rhabdomyolysis because it appears that stress is a critical precipitator of this disorder. However, because PSSM horses display abnormal insulin sensitivity, chromium is not recommended for horses with PSSM.

For more information on ER check out the University of Minnesota’s website: