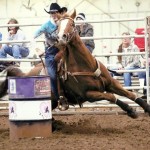 While many barns are littered with box fans every summer, horse owners often don’t think of using air movement to improve comfort and health on a larger scale. Let’s take a closer look at the impact this relatively simple solution can have on equine health and employee comfort.

Stabled horses are at particular risk of recurrent airway obstruction (RAO), commonly called heaves, and other respiratory ailments. Stated simply, RAO is characterized by a constriction of the airway, increased mucus production and coughing in response to a hypersensitivity to inhaled allergens. Affected horses often present with a chronic cough, nasal discharge, exercise intolerance, and respiratory difficulty, while more severely affected animals may also show anorexia and resulting weight loss.

“Particulates of all sorts cause airway inflammation and are highly associated with exacerbation of RAO in horses,” said Melissa Mazan, DVM, Dipl. ACVIM, associate professor and director of Equine Sports Medicine in the Department of Clinical Sciences at Tufts’ Cummings School of Veterinary Medicine. “Stables tend to be high in both organic and sometimes inorganic particulates. The organic particulates come from hay, bedding, manure, animal dander and other feed. The inorganic particulates can be from silica and other dirt particles in the indoor arena, and from diesel engines used inside the barn, such as motorized leaf blowers and tractors.”

Ammonia, an irritant gas, comes from urea, which is found in urine and manure—two unavoidable features in equine housing. Ammonia gas tends to concentrate closest to the source. In this case, the stall floor, which is also a location where a horse preferentially places its head (nostrils) as it eats or rests. Overexposure to ammonia may result in irritation of the eyes, nose, throat, and bronchial tissues, explains Melissa Millerick-May, PhD, assistant professor of medicine at Michigan State University.

While there are no set standards as to what level of ammonia is acceptable for equine exposure, there are regulatory limits in place for human exposure to ammonia gas. These regulations may serve as a valuable guide to determine potentially harmful exposure levels and aid in the development of stable management practices aimed at improving air quality for the benefit of both horses and humans. For example, the National Institute for Occupational Safety and Health[i] recommends a “Short Term Exposure Limit” of 35ppm for no longer than 15 minutes.

Few studies of ammonia concentrations in stables have been performed, and these vary in both sampling techniques utilized and placement (location) of sampling equipment. However, almost all studies report a change in ammonia concentration by season, bedding type and stable management (stall cleaning frequency, etc.).

“Our investigations in public/private riding stables corroborate those results,” explained Millerick-May. “In some instances, we found concentrations to be  greatest—in the range of 35 to 50 ppm—6 inches above the ground, approximately the location of the horses’ nostril while eating hay or lying down, so it is possible horses could be exposed to concentrations that are potentially detrimental to airway health. Our measurements also highlighted the fact that we as caretakers aren’t likely to be ‘aware’ of the severity of the problem, as the air we breathe is at a higher elevation, and thus not as concentrated.”

Although respiratory ailments affect a staggering number of stabled horses, many see dramatic improvement with a simple, and cheap, solution: moving outside. However, such relocation isn’t always possible or desirable, depending on the owner’s situation and the horse’s intended use. In such cases, maximizing the amount of fresh air coming into and circulating within the barn can help to mimic the more natural pasture life.

“It has been well documented that improving ventilation in the barn will decrease level of airborne particles and gases,” said Laurent Couetil, DVM, PhD, Dipl. ACVIM, professor in the Department of Veterinary Clinical Sciences at Purdue University. “Appropriate ventilation has to bring air in the barn from the outside.”

Ventilation can be achieved by simple management steps of opening windows and doors (even in cold weather, which horses tolerate far better than humans), as well as using mechanical systems and ventilation fans to force outside air in and inside air out. This air exchange ensures a supply of fresh air into the facility.

“The more air changes there are, the more dilution there is of deleterious particulates in the air, especially hay mold spores,” Mazan said.

Once the fresh air is introduced, it’s also important to circulate it throughout the facility to ensure it reaches the horses’ breathing zone.

“The greater the ability to move clean air into the stall, and contaminated air out, the better the chances for minimizing airway inflammation/irritation from all indoor air contaminants,” Millerick-May said. “Air movement within a facility is important as there is a directional component to minimizing exposures.  If, for example, the source of exposure is ground level, air movement should be linear in flow (for example, from a back window through the stall and out the other side), or alternately what is considered to be down draft ventilation where (clean) air is moved from a higher elevation toward the ground.”

Large diameter, low speed overhead fans, which range up to 24 feet in diameter, were designed to move air throughout voluminous spaces, such as industrial facilities. But they’ve also found wide adoption in dairy and equine barns.

“It is advantageous to place fans above ground level so that the airflow does not result in re-entrainment and dispersion of contaminants into the environment, as is likely to happen if fans are placed on the floor,” said Millerick-May. “Overhead fans should be placed in such a manner to allow for downward air movement, and run with a velocity that will assist in moving clean air into the horses’ airspace and push contaminated air out. Consulting with an individual experienced in balancing ventilation within agricultural environments can be a valuable step to improving air quality within existing stables, as well as in the planning process when considering building new stables.”