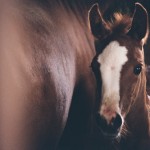 tack: 1) a rider’s equipment. 2) As a verb, including his/her equipment as
in: He tacks his horse each day.
Tagamet™: trade name for the drug cimetidine, a medication used to treat
ulcers.
tattoo: a permanent, indelible mark on the inside of the upper lip used to
identify racehorses.
teaser: a male horse used at breeding farms to determine whether a mare is
ready to receive a stallion.
tendinitis: inflammation of a tendon, usually due to injury. Signs
generally include swelling and heat over affected tendon, pain on finger
pressure, lameness and a protective stance to limit tendon stress.
Treatment may include aggressive first aid to limit swelling and
hemorrhage between tendon fibers, enforced rest, immobilization of the
tendon, administration of anti-inflammatory medications and physical
therapy to limit formation of adhesions.
tendon sheath: sheath containing synovial fluid that surrounds a tendon in
a high-friction area, usually where a tendon runs over a bone.
tendon: cords of strong, white, collagen fibers that connect a muscle to a
bone or other structure and transmit the forces generated by muscular
contraction to the bones.
tendonitis: inflammation of a tendon usually due to tendon fiber
disruption.
tetanus antitoxin: antitoxin is a product made from blood serum containing
antibodies against a specific toxic (poison). Tetanus antitoxin is made of
equine serum and contains antibodies against the tetanus toxin.
tetanus toxoid: a toxoid is a vaccine made of toxin (poison) that has been
altered chemically so that it has no toxic effects, but is able to
stimulate immune response. Tetanus toxoid is a vaccine that stimulates the
horse’s body’s production of antibodies against the toxins that cause
tetanus.
tetanus: a disease resulting from toxins produced by bacteria, usually
resulting when they infect a wound, particularly a deep puncture wound,
where oxygen is scarce. Because this bacteria is present in the horse’s
manure, they are ubiquitous in the soil on a horse property. Signs of
tetanus may include elevation of both nictitating membranes when the
horse’s face is tapped gently below the eye, spasms of the muscles in the
jaw, making it difficult or impossible to eat or drink, a “sawhorse”
stance with rigid legs, convulsions triggered by noise or other stimuli,
profuse sweating and death. Treatment is usually aggressive debridement of
the infected wound to prevent further toxin absorption, intravenous
administration of tetanus antitoxin, administration of anti-seizure
medications, sedatives and muscle relaxants and intensive supportive care
including intravenous fluids and feeding a gruel via stomach tube.
therapeutic ultrasound: a therapy to create heat and stimulate healing.
thermography: diagnostic technique utilizing instrumentation that measures
temperature differences. Records the surface temperature of a horse.
Unusually hot or cold areas may be indicative of some underlying pathology
(deviation from the normal.)
third phalanx(P3): see coffin bone.

Thoroughbred: A horse whose parentage traces to any of three “founding
sires” (the Darley Arabian, Byerly Turk or Godolphin Barb) and who
satisfies the rules and requirements of The Jockey Club and is registered
in “The American Stud Book” or in a foreign stud book recognized by The
Jockey Club and the International Stud Book Committee.
thoroughpin: swelling in the tendon sheath of the deep digital flexor
tendon above the hock.
thrush: a bacterial infection of the frog and/or adjacent crevices of the
foot’s sole, causing a blackish discharge and foul odor. Treatment
generally includes trimming and debridement of affected tissues,
disinfection with copper sulfate, tincture of iodine (7 percent), or
merthiolate, provision of dry clean environment, good hygiene and daily
foot care.
thumps: see synchronous diaphragmatic flutter.

tie-back surgery: a procedure used to suture the arytenoids cartilage out
of the airway as a treatment for roaring. Referred to as laryngoplasty.
See roaring

tightener: a leg brace.
toe crack: a vertical crack in the hoof wall near the front of the foot.
toe-in: a conformation flaw in which the front of the foot is rotated
inward and looks pigeon-toed. Often causes the leg to swing outward during
locomotion (paddle).
toe-out: a conformation flaw in which the front of the foot is rotated
outward. Often causes the leg to swing inward during locomotion (winging).
tongue tie: strip of cloth-type material used to stabilize a horse’s
tongue to prevent it from “choking down” in a race or workout or to keep
the tongue from sliding over the bit, rendering the horse uncontrollable.
Also know as a “tongue strap.”
top line: 1) A horse’s breeding on its sire’s side 2) The visual line
presented by the horse’s back.
torsion: a twist in the intestine.
toxemia: a poisoning sometimes due to the absorption of bacterial products
(endotoxins) formed at a local source of infection.
TPR: Temperature, Pulse, Respiration.
tracheotomy: an artificial opening made in the windpipe (trachea) when a
problem in the horse’s nasal cavity or throat has blocked the passage of
air, making it impossible to breathe. Usually an emergency procedure.
transfaunation: administration of beneficial bateria to a horse suspected
of intestinal disease due, at least in part, by disruption of the normal
bacterial population in the gut.
trapped epiglottis: see entrapped epiglottis.

trot: a gait in which the legs on the same side of the horse’s body work
in opposition; often described as the same motion a child makes when
crawling on the floor.
tubing: inserting a nasogastric tube through a horse’s nostril and into
its stomach for the purpose of providing oral medication.
twitch: a restraining device usually consisting of a stick with a loop of
rope or chain at one end, which is placed around a horse’s upper lip and
twisted. It causes a release of endorphins that relax a horse and curb its
fractiousness while it is being handled.
tying up (acute rhabdomyolsis): a form of muscle cramps that ranges in
severity from mild stiffness to a life-threatening disease. A generalized
condition of muscle fiber breakdown usually associated with exercise. The
cause of the muscle fiber breakdown is uncertain. Signs include sweating,
reluctance to move, stiffness, and general distress.
From: www.aaep.org