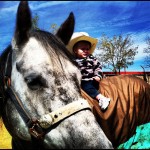 saddle pad: a piece of felt, sheepskin, foam rubber, or cotton, used as a
base for the saddle.
salmonellosis, salmonella infection: a contagious intestinal infection,
causing severe acute diarrhea or chronic diarrhea. Acute diarrhea is
usually accompanied  by fever and abdominal pain, horses that recover
often fall victim to laminitis. Treatment usually requires aggressive
intensive care, qurantine, pain management, stress management and may
include antibiotics and transfaunation.
sand crack: see heal crack.
sarcoid: a skin condition caused by an invasion of skin tissues by
unidentified virus. Lesions usually are tumor like, sometimes ulcerated,
spreading locally or to other areas of the horse’s body. For each case,
optimal treatment usually is chosen on the basis of individual
characteristics, such as location, aesthetics and aggressive growth. It is
not uncommon for sarcoids to return after removal.
savage: when a horse bites another horse or person.
Scintigraphy (nuclear scintigraphy): a diagnostic imaging technique
particularly well suited to the equine athlete. To image the horse’s
musculoskeletal system, a bone-seeking radiopharmaceutical, usually
Technectium — 99M, is injected intravenously and an image is subsequently
produced using a gamma camera. The bone-seeking radiopharmaceutical will
be deposited where the bone is more metabotically active, such as at
stress fractures or other abnormal inflammatory conditions.
scratches: a hot, swollen, raw, painful inflammation of the skin on the
back’s of the horse’s pasterns, usually involving two or more feet.
Treatment requires diligence and strict hygiene, and generally includes
gentle daily or twice daily cleansing of the area, removal of scabs,
application of an antiseptic dressing and housing in an area that is dry
and clean. Treatment failure occurs when the inflammation and/or infection
are too deep to be reached topically, requiring systemic medication and/or
surgery to remove affected tissue.
screw fixation: a procedure in which steel alloy screws are surgically
inserted to hold together a fractured bone.
sensitive laminae: sensitive tissue beneath the hoof wall that contains
nerves and vessels.
septicemia: blood poisoning due to bacteria and their toxins in the
horse’s bloodstream. Symptoms may include loss of appetite, fever and
depression. Treatment generally includes support and administration of
antibiotics to which the causative bacteria are sensitive.
sequestrum: a loose, dead fragment of broken bone, often causing local
infection.
sesamoid bones: two small bones (medial and lateral sesamoids) located
above at the back of the fetlock joint.
sesamoid fracture: fracture of sesamoid bone. Fractures can be small chips
or involve the entire bone. According to their location, fractures are
described as apical, abaxial or basilar. Surgical repair is often done by
arthroscopy.
sesamoiditis: inflammation of the sesamoid bones.
shadow roll: a (usually sheepskin) roll that is secured over the bridge of
a horse’s nose to keep it from seeing shadows on the ground and shying
away from or jumping them.
shank: rope or strap attached to a halter or bridle by which a horse is
led.
shedrow: stable area; a row of barns.
shedding: 1. exfoliation of entire skin; 2. falling out of haircoat; 3. putting animals into a shed; 4. excretion of an        infectious agent from the body of an infected host.
shivers: a trembling disorder of the hind lmbs and, in severe cases, other
body parts. Signs are seen most often when the horse is at rest, backing
or when asked to pick up a hind foot. Trembling can also occur in the
tail, forelimbs, eyes and ears. In some cases, shivers has occurred after
recovery from general anesthesia; in other cases, particulary in draft
horses, it appears when a horse is worked strenuously enough to become
rapidly fatigued. The condition tends to worsen over time, and there is no
specific treatment. Some cases respond well to anti-inflammatory
medication.
shoe boil: see capped elbow.
simple fracture: a fracture along a single line.
sinker: in laminitis, when the coffin bone becomes detached from the hoof
wall, sinks downward and pushes through the sole of the foot.
sire: 1) the male parent. 2) to beget foals.
slab fracture: a fracture in a bone in a joint that extends from one
articular surface to another. Most often seen in the third carpal bone of
the knee.
slipped: a breeding term meaning spontaneous abortion.
snaffle bit: see bit.

snip: small patch of white hairs on the nose or lips of a horse.
socks: solid white markings on the legs extending from the top of the hoof
to the fetlock.
solid horse: contender.
spavin: see bog and bone spavin.
speedy cut: injury to inside of the knee or hock caused by a strike from
another foot.
spiral fracture: fracture which spirals around the bone.
spit the bit: a term referring to a tired horse that begins to run less
aggressively, backing off on the “pull” a rider normally feels on the
reins from an eager horse. Also used as a generic term for an exhausted
horse.
splint: 1) either of the two small bones that lie along the side of the
cannon bone. 2) the condition where calcification occurs on the splint
bone causing a bump. This can result from a fracture or in response to
trauma to the splint bone. See periostitis.
sprain: mild tearing of a ligament.
stall walker: horse that moves about its stall constantly and frets rather
than rests.
stallion season: the right to breed one mare to a particular stallion
during one breeding season.
stallion share: a lifetime breeding right to a stallion; one mare per
season per share.
stallion: an intact male horse.
standing bandages: see bandages.

star: any number of white markings on the forehead, (the forehead defined
as being above an imaginary line connecting the tops of the eyes.)
steeplechase: jumping a series of brush fences at a gallop.
steward: officials responsible for monitoring adherence to rules during
competition.
sticker: see calk.

stifle: joint above the hock which is made up by the femur, the patella
and the tibia. Inflammation of the stifle is often called gonitis.
Equivalent to the human knee.
stirrups: metal d-shaped rings that support the rider’s feet. They are
suspended from the saddle by the stirrup leathers. The length of the
leathers is adjusted to accommodate the rider’s leg length and riding
style.
stockings: solid white markings on the legs extending from the top of the
hoof to the knee or hock.
strain: tearing of a tendon.
strangles: contagious upper respiratory tract infection that can cause
fever, loss of appetite, watery-to-thick nasal discharge, cough and
swelling and eventual drainage of pus from the lymph nodes under the
horse’s lower jaw. Treatment is generally supportive. Hot packs and/or
poultices are used to encourage drainage of abscessed lymph nodes.
Administration of systemic antibiotics may be indicated.
stress fracture: a fracture produced by the stress created by repetitive
loading of the bone during locomotion. May occur as a consequence of
athletic training.
stride: a complete cycle of limb movements at any gait. Stride length is
the distance covered between successive imprints of the same hoof.
stringhalt: a muscle and/or nerve disorder, affecting one or both hind
limbs. The affected horse often lift his affected hind limb(s) too high,
sometimes so high that he kicks himself in the belly, holds the leg
elevated for a moment, then slaps it sharply down. This condition can
develop at any age and the cause is unknown. Stringhalt is usually treated
with muscle relaxants and/or surgical removal of a section of the culprit
muscle and its tendon, the lateral digital extensor. Without treatment,
the condition rarely improves.
stripe: a white marking running down a horse’s face, starting under the
forehead, an imaginary line connecting the tops of the eyes.
stud fee: the fee paid for the breeding services of a stallion. Can range
from a couple hundred dollars to tens of thousands.
stud: 1) male horse used for breeding. 2) a breeding farm.
studs: removable metal projections of various shapes and sizes that are
used on the bottom of the horse’s shoes to provide additional traction on
a grass surface.
suckling: a foal in its first year of life, while it is still nursing.
sulk: when a horse refuses to extend itself.
superficial digital flexor tendon: located on the back of the leg between
the knee (front leg) or hock (rear leg) and the pastern. The function is
to flex the digit, and aid in support of the lower limb or digit (coffin,
pastern and fetlock joints) in all four limbs. In the front leg it also
flexes the knee (carpus) and extends the elbow, while in the rear leg it
extends the hock. Functions in tandem with the deep digital flexor tendon.
Injuries more often affect the front legs.
superior check ligament: fibrous band of tissue that originates above the
knee and attaches to the superficial flexor tendon. Primary function is
support of the tendon. Also known as the accessory ligament of the
superficial flexor tendon.
suspensory ligament: originates from the top part of the cannon bone and
runs down the back of the leg. Just above the fetlock, it divides into two
branches that attach to the sesamoid bones, then passes around to the
front of the pastern where it joins the extensor tendon. Its function is
to support the fetlock.
swayback: horse with a prominent concave shape of the backbone, usually
just behind the withers (saddle area).
sweet itch, queensland itch: hypersensitivity to the bites of tiny members
of the Culicoides fly family called midges or no-see-ums. An affected
horse rubs the crest of the neck until mane hairs break off and the skin
becomes thickened. There is no cure. Treatment can include increasing pest
control efforts, and, in severe cases, administration of systemic
corticosteroids to soothe inflamed tissues.
swipe: a groom.
synchronous diaphragmatic flutter (thumps): a contraction of the diaphragm
in synchrony with the heart beat after prolonged exercise. Affected horses
have a noticeable twitch or spasm in the flank area, which may cause an
audible thumping sound, hence the term “thumps.” Most commonly seen in
electrolyte-depleted/exhausted horses. Usually, the condition resolves
spontaneously with rest and appropriate therapy.
synovial fluid: lubricating fluid within a joint, tendon sheath or bursa.
synovial joint: a moveable joint that consists of articulating bone ends
covered by articular cartilage held together with a joint capsule and
ligaments. The joint capsule contains synovial fluid.
synovial sheath: the inner lining of a tendon sheath that produces
synovial fluid. Allows ease of motion for the tendons as they cross
joints.
synovitis: inflammation of a synovial structure, typically a synovial
sheath.
From: www.aaep.org