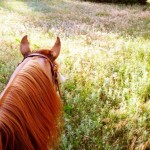 farrier: horseshoer.
fetlock (joint): joint located between the cannon bone and the long
pastern bone, equivalent to the human knuckle but often referred to as the
“ankle.”

filly: female horse four years old or younger. The age in Quarter horses
is three years old and younger.
firing: see pin firing.
Firm (track): a condition of a turf course corresponding to fast on a dirt
track. A firm, resilient surface.
fissure (fracture): longitudinal crack through only one surface of a bone.
fistulous withers: a deep infection at the withers, possibly due to a
contusion-type injury from poor-fitting tack, followed by a break in the
skin through which damaged tissues become contaminated. Signs may include
swelling, heat, pain and discharge of pus and debris through draining
tracts. Treatment, which is done cautiously to avoid human infection,
generally focuses on debridement and disinfection of contaminated tissues.
In some cases, administration of systemic antibiotics is performed.
flack jacket: similar to a jacket worn by a quarterback, the rider’s flak
jacket protects the ribs, kidneys and back.
flat race: contested on a level ground without a jumping component as
opposed to a steeplechase. Often used in the term, on the flat.
float: 1) v. an equine dental procedure in which sharp points on the teeth
are filed down. 2) n. the instrument in which the above procedure is
performed.
foal: 1) a horse of either sex in its first year of life. 2) as a verb, to
give birth.
footing: the surface upon which the horse performs.
founder: see laminitis.
fracture: a break in a bone. See comminuted; compound; condylar;fissure;
metacarpal;oblique;saucer; sesamoid; slab; spiral; simple; stress.
frog: the V-shaped, pliable support structure on the bottom of the foot.
full brother, full sister: horses that share the same sire and dam.
furlong: one-eighth of a mile; 220 yards; 660 feet.
furosemide: a medication for the treatment of bleeders, commonly known
under the trade name Salix. Furosemide is primarily a diuretic, but has
also been shown to reduce hypertension (high blood pressure) in the
horse’s lung.
“grab a quarter”: injury to the back of the hoof or foot caused when the
hind hoof steps on the front hoof. Also known as “overreaching.”
gait: the characteristic footfall pattern of a horse in motion. Four
natural gaits are performed by all horses: walk, trot, canter and gallop.
Some horses also perform other gaits, such as the pace, running walk,
rack, etc.
gastric ulcer: ulceration of a horse’s stomach. Often causes symptoms of
abdominal distress (colic)
gelding: a male horse of any age that has been neutered by having both
testicles removed (“gelded”).
get: progeny of sire.
girth: an elastic and/or leather band, sometimes covered with sheepskin,
that passes under a horse’s belly and is connected to both sides of the
saddle.
granddam: see second dam.

grandsire: the grandfather of a horse; father (sire) of the horse’s dam or
sire.
gravel: infection of the hoof resulting from a crack in the white line
(the border between the insensitive and sensitive laminae). An abscess
usually forms in the sensitive structures, and may eventually break at the
coronet as a result of the infection.
gray: a horse color where the majority of the coat is a mixture of black
and white hairs. The mane, tail and legs may be either black or gray
unless white markings are present.
greasy heel, grease heel: a severe, deep skin infection on the backs of
the horse’s pasterns. The bubbly-looking skin growth creates deep crevices
for the infective organism to escape topical treatments. This condition
usually involves two or more feet, most often the hind feet. Successful
treatment typically requires aggressive debridement, with twice daily
cleansing and disinfection of remaining tissues. The horse should be
housed in an area that’s dry and clean. Systemic antibiotics may be
warranted if the specific infective bacteria are identified via culture.
green osselet: in young horses, a swelling in the fetlock joint,
particularly on the front of the joint where the cannon and long pastern
bones meet. This swelling is a result of inflammation and reactive changes
of the front edges of these two bones. If the green osselet does not heal,
a “chronic osselet” might develop with a permanent build-up of synovial
fluid in the joint and inflammation and thickening of the joint capsule
over the damaged area, with secondary bone changes following the initial
inflammation.
groom: a person who cares for a horse in a stable.
growth plates: located near the end of long bones where they grow in
length. See physis.

grullo: body color in American Quarter horses smoky or mouse-colored (not
a mixture of black and white hairs, but each hair mouse colored); mane and
tail black; usually has black dorsal stripe and black on lower legs.
guttural pouch: an air-filled pouch in the throat region that may become
infected. The pouch is part of the Eustachian tube, a passage between the
pharynx and the middle ear, and is unique to the horse.
From: www.aaep.org