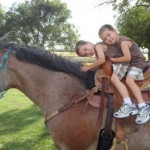 dam: the female parent of a foal.
dam’s sire (broodmare sire): the sire of a broodmare. Used in reference to
the maternal grandsire foal.

EPM: infection of the brain and spinal cord by a protozoan called
Sarcocystis neurona.The protozoa are spread by the definitive host the
opossum, which aquires the organism from scavenging carcasses of cats,
raccoons, skunks, armadillos and possibly even from harbor seals and sea
otters. Horses become infected by eating on contaminated areas where
opossums droppings are present. Signs can vary widely and may include
weakness, staggering, head tilt, dysphagia and/or seizures. Diagnosis is
based on symptoms and spinal tap of the horse.
equine influenza: a contagious viral disease of the upper respiratory
tract. Symptoms may include cough, fever, muscle soreness and nasal
discharge. Treatment is generally supportive. Rest until at least two
weeks after the cough has resolved is an important component of successful
treatment, since premature return to work can prolong the cough.
Vaccination is the most effective means of prevention.
equine viral arteritis (EVA): a contagious viral disease spread by casual
contact or by breeding with a previously infected mate. If mares are
infected while pregnant, they will usually abort. Affected horses are sick
and contagious for a week to 10 days with flu-like symptoms. Most victims
recover completely with proper nursing care (but can spread the disease to
others after recovery, via sexual contact).
equipment: see bandage; bar shoe; bit; blinkers; bridle; earmuffs; halter;
hood; nose band; overgirth; reins; saddle cloth; saddle pad; shadow roll;
shank; stirrups, breast plate; foregirth; martingale.

estrous cycle: the length of time between consecutive ovulations.
estrus (heat): associated with ovulation; a mare usually is receptive to
breeding during estrus. The mare’s behavior at this time is referred to as
“horsing.”
euthanasia: elective termination of the horse’s life for humane reasons.
EVA (equine viral arteritis): a highly contagious disease that is
characterized by swelling in the legs of all horses and swelling in the
scrotum of stallions; can cause abortion in mares and can be shed in the
semen of stallions for years after infection.
extensor tendon: tendon of a muscle that extends the knee (carpus) joint.
From: www.aaep.org