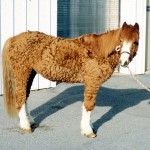 Equine Cushing’s disease is one of the most common diseases of horses greater than 15 years of age. The clinical signs are associated with abnormally elevated hormone concentrations in the blood and along with other hormones, cortisol, plays an important role in this disease. This syndrome is better defined as Equine Pituitary Pars Intermedia Dysfunction (PPID)because it reflects the location within the brain that is abnormal. In humans, Cushing’s disease affects a different location within the pituitary gland, thus the reason why veterinarians prefer to call this disease PPID.

Clinical signs of PPID can vary depending upon the stage of disease.  The average age of horses diagnosed with PPID is 20 years, with over 85 percent of the horses being greater than 15 years of age.  Although most common in aged horses, PPID has been diagnosed in horses as young as seven years of age. All breeds of horses can develop PPID, however ponies and Morgan horses have a higher incidence of the disease. The most classic symptom of PPID is a long curly hair coat that does not shed properly. This condition is referred to as hirsuitism.

Other symptoms that have been associated with PPID include excessive drinking and urination (polyuria/polydipsia), laminitis, lethargy, excessive sweating, muscle mass loss, repeated infections such as sole abscesses, tooth root infections, and sinusitis; infertility and bulging eyes that are a result of redistribution of supraorbital fat.

The best indication of PPID is the clinical sign of hirsuitism in the aged horse. The sensitivity of this clinical sign is better at predicting an abnormal pituitary than any diagnostic test available.

Horses that have subtle signs of PPID need to be tested to confirm the disease. Of the tests available, no single test is 100 percent accurate. The most commonly used tests in the field are the dexamethasone suppression test and the measurement of resting plasma ACTH concentration.

One caveat that has to be considered when using the dexamethasone suppression test is the time of year in which the test is conducted. Recent studies suggest that false positives can be obtained in the fall. One possible explanation for this seasonal aberration may be due to a normal hormonal process that is occurring in horses and ponies as the body is triggered to prepare itself for winter. Therefore, a positive test result obtained in the fall should be interpreted carefully. In contrast, a negative test at that time of year highly suggests that the horse has a normal pituitary gland.

A single blood measurement of ACTH concentration is advocated by some as a confirmatory test for PPID. This test is simple and avoids administration of dexamethasone to horses with active laminitis.  ACTH concentrations can vary in the same horse when sampled at 30-minute intervals. In addition, season affects ACTH. Donaldson reported that ACTH concentrations were greater than the reference ranges in 85 percent of horses and 97 percent of ponies in the month of September. Thus, this test is most useful when conducted at times of the year other than the fall. Another problem is handling of the sample inappropriately, which can falsely lower the results. In summary, if ACTH levels are high during the winter, spring and summer that suggests the horse has PPID, but a low ACTH test may not rule out the possibility of the disease.

There are other tests that have been used in research settings to diagnosis PPID. These include TRH (thyrotropin releasing hormone) test and the domperidone test. These tests have not been critically analyzed in a large number of horses and their ability to accurately predict PPID in early or late course of disease has yet to be determined.

Other tests have been suggested as useful in screening horses for PPID. A screening test is useful to identify which horses might have the disease, but not accurate enough to diagnosis whether the animal has PPID. For example, measurement of fasting serum insulin concentration is often performed in horses suspected of having PPID. A high fasting insulin suggests the horse has insulin resistance. Insulin resistance can occur in horses with PPID, but it also occurs in horses with equine metabolic syndrome and obese horses. Another screening test for PPID is the cortisol ciracadian rhythm test. In this test, serum cortisol concentration is compared in two samples, one collected in the early morning and one collected in the evening. Horses with PPID lose the natural daily rhythm of the hormone cortisol, which is normally high in the morning and low at night.  Loss of cortisol circadian rhythm also occurs in animals secondary to stress, disease and old age. Therefore, a loss of cortisol circadian rhythm may support the diagnosis of PPID but further testing is needed for confirmation.

In summary, an older horse with hirsutism is likely to have PPID. Early in the course of the disease the long curly hair coat may not be present. If the horse does not have hirsutism, a repeated test at four to six month intervals may be necessary to confirm the disease.

Treatment seldom achieves complete resolution or remission of disease. The most important reason to treat is to improve the quality of life. Infertility may be temporarily overcome by treatment of older broodmares with confirmed PPID.

Pergolide is the drug of choice for treatment of PPID.  The dose can be adjusted based on response to therapy or repetitive testing. Cyproheptadine may be marginally effective at controlling clinical signs and is therefore not used as frequently.

Supportive care is also important for enhancement of the quality of life of horses with PPID. High quality preventative medicine such as regular deworming, dental care and consistent farrier work has been advocated. In the warm months, clipping of unnecessary hair will keep the horse more comfortable.

Some horses with PPID have been documented to be insulin resistant and require a special diet. Insulin sensitivity can be improved by reducing body fat and avoiding feeds high in starch and sugar. Horses or ponies that have both insulin resistance and PPID should be fed hay that is less than 12 percent in non-structural carbohydrates. If the hay cannot be tested, soaking it for 30 minutes in cold water will lower the sugar content prior to feeding. Pasture access should be limited to one to two hours a day in addition to elimination of all treats such as sugar cubes. The affected horses can be fed a commercially prepared low-starch diet. If they are thin, the addition of fat in the form of rice bran or corn oil can be supplemented for added calories.

Not all horses with PPID are insulin resistant. This would be an additional consideration in a complete diagnostic evaluation especially if the horse or pony has laminitis.

Recognition of the clinical signs and early diagnoses are the first steps in identification of horses with PPID. Treatment and implementation of excellent wellness practices are the key features to extending the life of a horse with PPID.