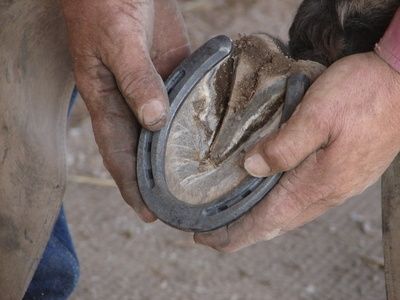 There may be no other routine procedure performed on a horse that has more influence on soundness than hoof preparation and shoeing. The goal should be to promote a healthy, functional foot, restore and maintain biomechanical efficiency, and prevent lameness.

Each horse should be evaluated individually, the optimal trimming and shoeing approach for that horse being dependent on the horse’s size, hoof and limb conformation, movement patterns and athletic use. While methods may vary, the basic objectives when trimming and shoeing are to facilitate breakover, protect the sole and provide adequate heel support.
Facilitating Breakover
Breakover is the phase of the stride between the time the horse’s heel lifts off the ground and the time the toe is lifted. During this phase, the toe acts as a pivot point (fulcrum) around which the heel rotates. Changes in toe length, hoof-pastern axis and hoof angle all affect breakover. In general, breakover is significantly delayed with the presence of a long toe and a low hoof angle (angle between the front of the hoof wall and the ground surface). The long toe acts as a long lever arm, requiring more time and effort to rotate the heel around the toe. In addition, excessive toe length can result in tearing of the attachment between the hoof wall and the coffin bone at the toe, which weakens the wall and may lead to hoof wall distortion. Shortening the lever arm facilitates breakover.
Depending on the horse, facilitating breakover may involve trimming the foot to decrease toe length (the distance between the ground and the top of the hoof wall at the front of the foot) and/or applying a rolled- toe, rockered-toe, or square-toe shoe.
Sole Protection
The function of the sole is to protect and support the underlying structures (primarily the coffin bone and the network of blood vessels that supply the sole and wall). The sole also bears some weight around the perimeter, where it meets the hoof wall. The sole should be concave (cupped) and firm on thumb pressure. Loss of concavity (i.e. flattening of the sole) and having some “give” or spring to thumb pressure should be considered abnormal.
A good depth of sole is necessary to maintain the concavity of the sole and to protect the underlying structures from injury. Inadequate sole depth is the most common cause of chronic sole bruising. Sole depth can be maintained simply by trimming the hoof wall appropriately and removing very little, if any, sole at each trimming. If a regular shoe does not provide sufficient sole protection, a pad can be placed between the sole and the shoe.
Heel Support
It is important to provide heel support because of the great forces placed on the heels during the landing and weight-bearing phases of the stride. The heel is a commonly overloaded part of the foot, and is thus prone to chronic bruising and shearing of the wall and its attachments. Abnormal hoof–pastern axis greatly contributes to overloading of the heels and chronic heel pain. A normal hoof–pastern axis is one in which a line drawn along the front of the hoof wall is parallel to the pastern. In this situation, each of the bones of the lower leg are in normal alignment. A low hoof angle creates a broken-back hoof–pastern axis, where the angle of the hoof wall is lower than the pastern angle. This configuration is commonly caused by the long-toe/underrun-heel foot conformation. This abnormality contributes to navicular syndrome, chronic heel pain, coffin joint inflammation, quarter and heel cracks and interference during motion. A high hoof angle creates a broken-forward hoof–pastern axis, where the angle of the hoof wall is higher than the angle of the pastern. This abnormality also contributes to coffin joint inflammation and pain in the navicular area, and to sole bruising.
In addition to trimming the hoof to normalize the hoof–pastern axis, it is important that the weight-bearing surface of the wall extends as far back as possible. Ideally, an imaginary line dropped down from the center of the cannon bone should land right where the heel ends (not well behind the heels, as is often the case). A commonly used principle is to trim the heels to the widest part of the frog (i.e. ensure that the weight-bearing part of the wall at the heels extends back as far as the widest part of the frog). However, while this approach may be appropriate in many horses, it may not be advisable or even possible in horses with low or underrun heels. Even though it may be possible to trim the heels to reach the widest part of the frog, it may have to be done at the expense of the hoof–pastern axis. We may have worsened the broken-back hoof–pastern axis in the process of trimming the heels to the widest part of the frog!
If the heel cannot be trimmed to provide optimal support at the back of the foot, the branches of the shoe can be extended to compensate and optimize the bearing surface area. In this way, the requirement for adequate heel support is met and the integrity and function of the hoof are preserved.
In summary, regardless of the horse’s breed, size, hoof shape, limb conformation, or use, applying these basic principles in a moderate, common-sense way maximizes the chances of restoring and maintaining strong, healthy, fully functional feet.
By Stephen E O’Grady, BVSc, MRCVS