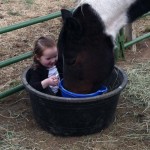 We all know that colic is the number one noninfectious health risk for horses. There are a number of types of colic but the one we see the most in winter is impaction colic.

Impaction colic is essentially constipation and most often includes the accumulation of hard, dry fecal material in the colon. The usual signs of impending impaction colic are depression, a decreased appetite and decreased production and dryness of manure. Although poor hay quality, lack of exercise, internal parasites and dental problems are all predisposing factors for impaction colic, decreased water consumption is thought to be the primary predisposing factor for the condition, especially in the winter when most horses drink less water.

We’ve always advised our clients to provide warm water during winter months, as we’ve thought it increased the amount of water horses would drink. This is true, but the issue is a bit more complicated that it might appear at first glance.

Back in the mid-90’s, researchers at the University of Pennsylvania School of Veterinary Medicine conducted a series of studies to determine whether horses would drink more water during cold weather if it was heated.

What they found was that during cold weather, horses drank 40 percent more water when the water was heated. But only if that was the only source of water available.

If there was icy water available, they drank almost exclusively from the icy water and drank less volume than if they had only warm water available. So the important conclusion is that your horses will drink more water during cold weather if it is heated but no other source of water should be available.

In the study, the researchers also observed some interesting aspects of horse drinking behavior. For example, horses in the stalls that are fed hay and grain will do most of their drinking within a few minutes after eating the grain and within an hour or so after they are given hay, regardless of water temperature.

They also noted that in all horses, whether or not they were stalled, 82 percent of the drinks took place within three hours after feeding. So, if we are using buckets that need to be refilled, it’s important that we refill them at or just after feeding twice a day. Remember, that the average 1,200 –pound horse will drink seven to 10 gallons of water a day, so a five-gallon bucket of water twice a day is adequate in most cases unless the horse is exercising and sweating heavily.

The study demonstrated there was no difference in water consumption between heated water buckets filled twice daily and water continuously available in a heated stick tank.

Following the winter study, the researchers wondered whether providing cold water rather than ambient warm water would increase water consumption in the summer so they conducted a second study during the summer when barn temperatures ranged from 60-85 degrees Fahrenheit.

During that study, researchers provided water at barn temperature in five-gallon buckets that were refilled twice a day (8am and 5pm) vs. water that was cooled with ice and averaged around 34 degrees Fahrenheit, just a bit above freezing. What they found was that like the cold-weather study, most drinking occurred two to three hours after feeding. However, the study revealed that horses drank similar amounts of warm water and cold water during hot summer weather, so there was no advantage in providing cold water.

Unfortunately, horses were not provided both warm and cold water, like they were in the winter study, so it was not determined whether horses had a preference.

The bottom line is to increase water consumption and decrease the likelihood of an impaction colic, provide warm water in the winter and prevent access to cold water. If you have any questions about preventing colic in your horse, your local AAEP-member veterinarian is always your best source of information.

About the author: Thomas R. Lenz, DVM, MS, DACT, is a trustee of the American Horse Council, past chairman of AQHA’s research committee and past president of the AAEP.