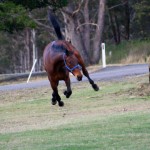 warmblood: genetic term used to describe distinct breeds usually named
according to the region in which the breed was developed (e.g., Dutch
Warmbloods from The Netherlands). Generally large, well-muscled horses
with calm temperaments, making them suitable for dressage and show
jumping.

washed out: a horse that becomes so nervous that it sweats profusely. Also
known as “washy” or “lathered up.”
wave mouth: undulating surface of the grinder teeth due to uneven wear.
WBC: White Blood Cell Count.
weanling: a foal less than one year old that has been separated from its
dam.
WEE: Western Equine Encephalomyelitis. Refer to EEE.

white line: when looking at the sole of the foot, the thin area between
the insensitive outer hoof wall (insensitive laminae) and inner sensitive
laminae.
white: a horse color, extremely rare, in which all the hairs are white.
The horse’s eyes are brown, not pink, as would be the case for an albino.
wind gall: see arthritis. accumulation of synovial fluid in the fetlock
joint or windgall in the tendon sheath of the digital flexor tendons just
above the fetlock joint.
wind puff: see wind gall.
wind sucker: see cribber.

windpuffs: synovial effusion, with or without involvement of the adjacent
tendon sheath, in the fetlock joint. This causes puffiness of the joint
that might extend partway up the horse’s cannon bone. Windpuffs may or may
not be associated with lameness. Causes can include excessive stress on
joint soft tissues and tendons due to poor conformation, poorly balanced
farriery, heavy training and/or sudden stall confinement after a period of
regular training. Treatment generally focuses on identifying and
correcting the underlying cause, rest, ice and pressure wraps to limit
inflammation and sweeling.
withers: 1) area above the shoulder where the neck meets the back. 2) the
horse’s height is measured at the highest point of the withers.
wobbler syndrome: 1) neurological disease associated with general
incoordination and muscle weakness. 2) can be caused by injury to spinal
cord in area of cervical (neck) vertebrae or is associated with
malformation of the cervical vertebrae.
wolf teeth: the first premolars, located toward the back of the space
between the horse’s front teeth and the grinders. When present on the
lower jaw, wolf teeth are small and needle-like. When the presence,
position and/or size of wolf teeth interfere with acceptance of the bit,
the teeth are removed, usually with the horse awake and sedated.
X-ray: see radiograph.
xeroradiography: a costly type of x-ray procedure using specially
sensitized screens that give higher resolution on the edges of bone and
better visualization of soft tissue structures.
yearling: a horse in its second calendar year of life.
Zantac™: trade name for drug ranitidine, medication used to treat stomach
ulcers.
From: www.aaep.org