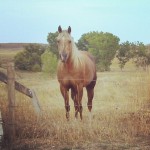 oblique (fracture): fracture at an angle to the shaft of the bone.
OCD (osteochondritis desicans) lesion: a cartilaginous or bony lesion that
is the result of a failure in development.
off side: right side of horse.
oiled (oiling): administering mineral oil via nasogastric tube to help
relieve gas or pass blockage. Preventive procedure commonly used in long
van rides to prevent impaction colics. See colic.

on the bit: refers to carriage of the horse in which the neck and back are
rounded, the hind legs are well engaged and the horse is obedient to the
action of the bit. Also known as “in the bridle”.
on the muscle: denotes a fit horse.
open fracture: see compound fracture.

osteoarthritis: a severe form of arthritis that has a progressive
degeneration of joint cartilage. Occurs most frequently in the joints
below the radius in the foreleg and the femur in the hind leg. Some of the
more common causes include repeated trauma, conformation faults, blood
disease, traumatic joint injury, subchondral bone defects (OCD) lesions
and repeated intra-articular corticosteroid injections. A permanent form
of arthritis with progressive loss of the articular cartilage in a joint.
See degenerative joint disease.

over at the knee: type of conformation in which the front leg looks like
it has a forward arc with the center at the knee when viewed from the
slide.
overcheck: a strap that holds the bit up in the horse’s mouth.
overgirth: an elasticated strap that goes completely around a horse over
the saddle, to keep the saddle from slipping.
over-reaching: toe of hind shoe striking the forefoot or foreleg.
P3: third phalanx. See coffin bone.
paddle: type of movement in which the lower front leg swings outward.
Often associated with toe-in conformation.
paint: counter-irritant used to increase blood supply and blood flow and
to promote healing in the leg. A mild form of blistering.
palmar: back of front limb from knee down.
parrot mouth: an extreme overbite.
pastern: the area between fetlock joint and hoof. It comprises the long
(P1) and short (P2) pastern bones and the pastern joint.
pedal bone: see coffin bone.

pemphigus foliaceus: a skin disorder caused by the body’s immune system
mistakenly attacking some of its own cells involved in skin production.
Signs may include the formation of blisters and pustules that break open
and form crusted sores. Lesions generally start on the horse’s face and
limbs, eventually spreading to the rest of the body. There is no cure, but
treatment can control the lesions and cause the disorder to go into
remission. Treatment may involve suppression of the immune system by
administration of systemic corticosteroids.
periostitis: inflammation of tissue (periosteum) that overlies bone.
Periostitis of the cannon bone is referred to as bucked shins, while
periostitis of the splint bone is called a splint. May be heard in the
expression “Popped a splint.”
phenylbutazolidan: see bute.

physis (plural, physes): the “growth plate” at the end of the long bones
(such as the cannon bone) that lets the bone grow.
physitis: an inflammation in the growth plate (physis) at the ends of the
long bones (such as the cannon bone) in young animals. Symptoms include
swelling, tenderness and heat. Although the exact cause is unknown,
contributing factors seem to be high caloric intake (either from grian or
a heavily lactating mare) and a fast growth rate.
pigeon fever: infection of a bacteria, causing one or more lumps beneath
the skin the horse’s brisket and lower abdominal area. Treatment may
include the application of hot packs and/or poultices to draw out
infection and/or lancing the abscesses. Antibiotics may also be prescribed
after abscesses have been lanced.
pin firing: thermocautery used to increase blood flow to leg, thereby
promoting healing.
pinhooker: a person who buys horses, cattle, etc. with the specific
intention of re-selling it at a profit.
pipe-opener: exercise at brisk speed.
Piroplasmosis (or equine babesiosis, “piro” or horse tick fever): a
tick-borne disease caused by blood parasites. Acute signs include fever,
anemia, jaundice and swelling of the legs, chest and abdomen. The disease
is ultimately resolved through treatment, natural body defenses or death.
Horses in the United States are largely unexposed and are therefore
susceptible to the disease, while many European horses are symptomatic
carriers.
plantar: back of the hind limb from the hock down.
poll: the top of the head, between the ears.
polysulfated glycosaminoglycan (PSGAG): an anti-inflammatory agent used by
intra-articular injection in the therapy of traumatic and degenerative
arthritis in horses.
popped a splint: see periostitis.
posterior: situated toward the rear of the horse’s body.
Potomac Horse Fever (PHF): protozoal infection of the intestinal tract
usually causing diarrhea, fever, depression and colic. Treatment is
generally supportive and administration of appropriate antibiotics, along
with preventive measures to avoid the development of laminitis, a common
sequel to PHF.
poultice: a soft, mushy dressing, made of a mixture of dry, absorbent
substances with liquid or oil, applied to wounds or swellings to soften,
relax or stimulate the tissues or reduce swelling.
prep: a workout used to prepare a horse for a competition.
prop: when a horse suddenly stops moving by digging its front feet in to
the ground.
proud flesh: an overgrowth of pink, bubbly-looking tissue during healing
of certain flesh wounds. It can protrude from the injury site like a
tumor, preventing new skin from covering the wound. Treatment depends on
location and severity, and will usually include one or more of the
following: topical application of various medications designed to melt
away the excessive tissue, pressure bandages and/or surgical removal of
proud flesh.
pull up: to stop or slow a horse during a workout.
pulled suspensory: strain of the suspensory ligament (suspensory desmitis)
in which some portion of the fibers of the ligament have been disrupted.
Depending on severity, there may be loss of support of the fetlock joint.
From: www.aaep.org