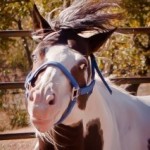 jumper: steeplechase or hurdle horse.
juvenile warts: pink or brown, fleshy, hairless growths, usually on the
muzzle or elsewhere on the face of young (less than 3-years-old) horses.
Believed to be caused by a contagious virus, juvenile warts tend to run
their course and disappear suddenly after being present a few weeks to
several months. It’s believed that the positive response to various home
remedies is merely coincidence – the warts were going to resolve anyway.
juvenile: two-year-old horse.
kissing spines, overriding dorsal spinous processes: a touching or
overriding of the vertical (dorsal) spinous processes of the vertebrae.
The primary sign generally is pain on palpation over the backbone and the
long muscles beside it. Depending on the location and extent of the
problem, the horse’s gait may be restricted. Treatment options may include
rest, injection of the area with medication to block inflammation and
pain, acupuncture, ultrasound or surgery.
lactic acid: organic acid normally present in small amounts in muscle
tissue, produced by anaerobic muscle metabolism as a by-product of
exercise. An increase in lactic acid occurs during exercise. A large
accumulation causes muscle fatigue, inflammation and pain.
lameness: a deviation from a normal gait due to pain in a limb or its
supporting structure.
laminae: a part of the hoof. See insensitive laminae and sensitive
laminae.
laminitis: an inflammation of the sensitive laminae of the foot. Many
factors are involved, including changes in the blood flow through the
capillaries of the foot. Causes include ingesting toxic levels of grain,
eating lush grass, systemic disease problems, high temperature, toxemia,
retained placenta, excessive weight-bearing as occurs when the opposite
limb is injured, and the administration of some drugs. Laminitis usually
manifests itself in the front feet, develops rapidly, and is life
threatening, although in mild cases a horse can resume a certain amount of
athletic activity. Laminitis caused the death of Secretariat.
laser (or cold laser): a low-intensity focused beam of light used to
reduce inflammation and promote circulation.
lateral: toward the side and farther from the center. Pertains to a side.
lathered (up): see washed out.
lead: 1) see shank. 2) the front leg that is last to hit the ground during
a gallop or canter stride.
left laryngeal hemiparesis: when the vocal fold or arytenoids cartilage on
the left side of the airway becomes partially or totally paralyzed and
interferes with air flow. Causes a whistling or “roaring” noise during
inspiration when the horse exercises. See roaring.
ligament: a band of fibrous tissue connecting bones that supports and
strengthens the joint and limits the range of motion.
lunge: a method of exercising a horse on a tether (“lunge line”).
Lyme disease: infection with the spiral-shaped bacteria Borrelia
burgdorferi, spread by the bite of an infected tick. Signs may vary widely
and can include recurrent lameness that shifts from one leg to another and
for which no other cause can be found, arthritis, stiffness and reluctance
to move. Treatment is usually administration of antibiotics from the
penicillin or tetracycline family.
From: www.aaep.org